Which Bull would you face? A must read

A young man wished to marry the farmer’s beautiful daughter. He went to the farmer to ask his permission. The farmer looked him over and said, “Son, go stand out in that field. I’m going to release three bulls, one at a time. If you can catch the tail of any one of the three bulls, you can marry my daughter.” 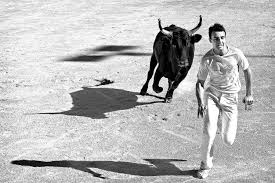 The young man stood in the pasture awaiting the first bull.

The barn door opened and out ran the biggest, meanest-looking bull he had ever seen. He decided that one of the next bulls had to be a better choice than this one, so he ran over to the side and let the bull pass through the pasture out the back gate.

The barn door opened again. Unbelievable. He had never seen anything so big and fierce in his life. It stood pawing the ground, grunting, slinging slobber as it eyed him. Whatever the next bull was like, it had to be a better choice than this one. He ran to the fence and let the bull pass through the pasture, out the back gate.

The door opened a third time. A smile came across his face. This was the weakest, scrawniest little bull he had ever seen. This one was his bull. As the bull came running by, he positioned himself just right and jumped at just the exact moment. He grabbed… but the bull had no tail!

Life is full of opportunities. Some will be easy to take advantage of, some will be difficult. But once we let them pass (often in hopes of something better), those opportunities may never again be available. So always grab the first opportunity.

Posted on January 30, 2013, in Must Read Articles and tagged opportunity lost, opportunity moral story, the bull you face, the farmers bull, the story of the bull, which bull would you face. Bookmark the permalink. Leave a comment.